Well, this piece is now about 18” in diameter and I have only a few inches to go, but it’s still a long way from the end.  Around the 16.5” diameter mark, I had completed one half of the total linear inches for this piece.  Yes, when you’re coiling, the farther you go the longer it takes.  But, for those of us who love it, the time and effort is worth it!

I had a few setbacks since my last post—a couple pesky health issues, nothing serious, just annoying and some reworking to do on the piece because…

Sometimes, you just have to rip it out!

As I was working along, I realized I didn’t like the way one section of the darker green was working, particularly when looking at where I wanted it to go later on.  I tried just working over a few stitches—which is OK when you don’t have too many changes, but realized that the white area there wasn’t right either.  So, I started taking out stitches.  Since this covered a pretty large area, I decided to do it in stages.  I redid the white area first, adding another row and reshaping it; then I redid the green.  The difference may look slight in these images, but the overall effect will be much better when the piece is done.  This took me a couple of weeks, particularly since I haven’t been able to get in the studio as much as I’d like.  My 20 to 30 hour a week goal is still in place, but it’s more a dream than a reality right now.

Here are the images for the changes I made…

The areas I wanted to change are the white area on the right side here as well as the dark green next to it toward the left and the darkest green next to the red/rust at the top in this image.

Here, I’ve removed most of the white and restitched it, adding white over the green, so there are six rows of white here instead of five. 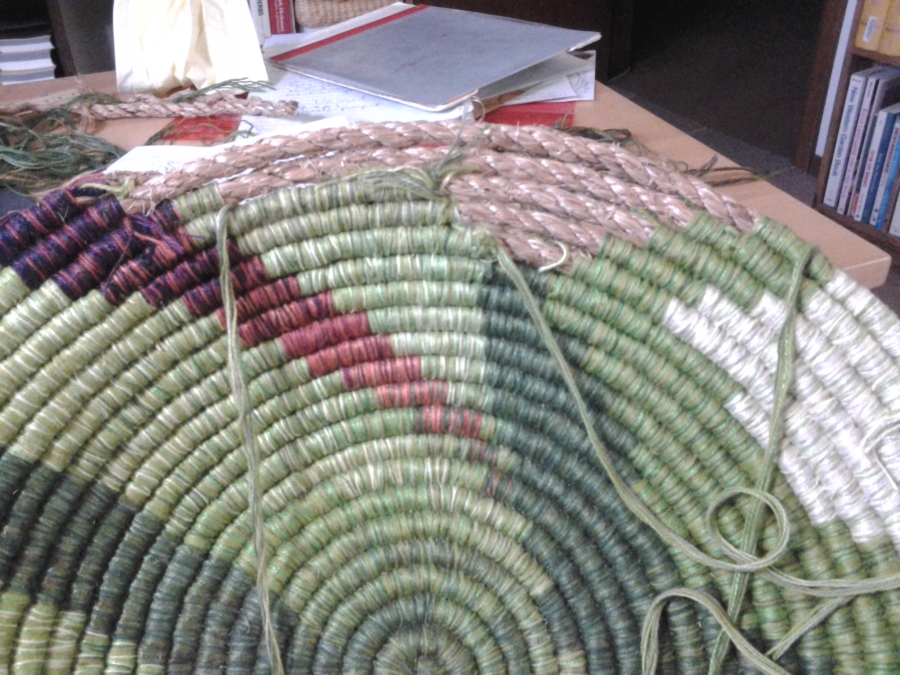 You can see some of the new white area and now I have taken out the green–much more extensive removal here!

Here’s the after picture.  There is now more of the darkest green outline and merging with the darker green.  Much better transition and interconnection of these areas and the white area has better balance with the medium green around it.

There might be a few other tweaks as I get toward the end–mostly smoothing out curves which are hard to manage on a curving surface–they distort in unexpected ways and ‘read’ differently than they would on a flat surface.

Hope all is well with you as we enter fall–not so cool yet, but getting there!

View all posts by linbentleykeeling

2 thoughts on “Almost there!”